The menstrual cycle: the biology behind NFP 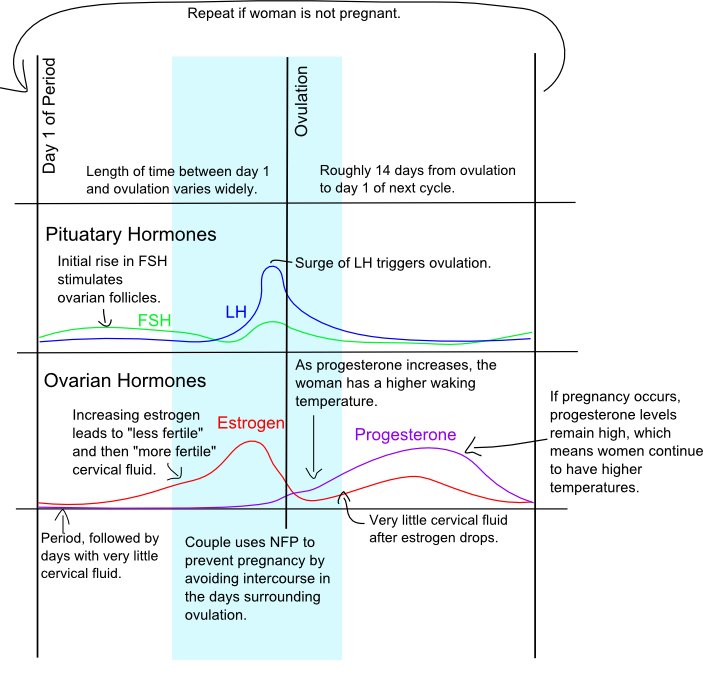 The menstrual cycle starts on the first day the woman gets her period. In the first few days of the cycle, the hormone FSH rises, stimulating the ovarian follicles.

As estrogen increases, a woman notices more cervical fluid, starting with "less fertile" fluid that is sticky and gradually turning into "more fertile" fluid that is stretchy and wet. This gives the woman and her husband warning that she is approaching her fertile time frame. Since the couple cannot calculate exactly when to expect ovulation, the couple decides when to abstain based on cervical fluid and data from past cycles.


Soon after estrogen peaks, the hormone LH suddenly surges, triggering the release of the ovum (the egg). The ovum only survives for a day. Afterwards, the ovarian follicle that released the ovum turns into a special, temporary body called the corpus luteum. The corpus luteum produces a surge of progesterone. The surge of progesterone causes an increase in the woman's waking (basal) temperature.

If the woman did not conceive, the corpus luteum atrophies. This is because the corpus luteum suppresses the production of FSH and LH, which it needs to sustain itself. The corpus luteum is effectively killing itself. With the corpus luteum no longer working, the level of progesterone drops. This triggers menstruation. The woman might notice that her basal temperature drops a day or two before she gets her period (otherwise, it will drop during her period).

If the woman conceived, the development of the fertilized egg produces the hormone human chorionic gonadotropin (hCG). This is the hormone detected by pregnancy tests. The hormone hCG looks similar to LH, which allows the corpus luteum to continue producing progesterone throughout pregnancy (instead of atrophying). As a result, the woman would observe continued high temperatures.